Contents
Add a header to begin generating the table of contents

Although vaping has now been used as a method to switch from cigarettes for many years, research is still ongoing into it's safety and effectiveness. However, research by UK government health bodies continues to support the statement that e-cigarettes offer a far safer alternative to smoking.

Below, we look at some of the most common concerns and misconceptions surrounding vaping.

US Vaping Illness, or 'EVALI'

In 2019, the media began to report a number of illnesses in America that had been linked to vaping. At the time, and still now, these reports can cause for concern amongst vapers and those considering switching to e-cigarettes. We have illustrated below what this means for vaping in the UK and tackle the question; is vaping safe?

Vaping In The UK V's The US

The use of e-cigarettes has rapidly increased since they first began to gain popularity in the mid to late 2000's. It's estimated that there are now around 2.7 million vapers in the UK. Approximately 54% of these individuals have given up smoking completely.

In 2016 there was an update to the EU's Tobacco Products Directive that included strict regulations regarding e-cigarettes. This included banning certain ingredients and applying restrictions on nicotine content and packaging. The regulations also require notification and approval for all vaping products before they can be sold in the UK.

This is in stark contrast to the United States where there are no clear regulations regarding quality or safety of products. Martin Dockrell, head of Tobacco Control at Public Health England, has highlighted the distinction between the UK and US. He noted that the incidences of lung illnesses in America have been identified by the FDA as being linked to vaping illicit or homemade liquids that contained THC and Vitamin E oils.

Vitamin E acetate is an oil derived from vitamin E. It is not known to cause harm when ingested, however experts say that it may be hazardous when inhaled. It may interfere with normal lung function and could lead to respiratory issues like those experienced by patients in the US.

State Officials from the Centre for Disease Control in America have now confirmed that there is a strong link between Vitamin E Acetate and the lung disease outbreak. The oil was found in samples tested by the FDA containing THC; the psychoactive substance found in the cannabis plant. The CDC have confirmed that products containing THC played a major role in the outbreak of vaping related illnesses, with many of the samples tested having been purchased from informal sources.

THC is an illegal substance in the UK and there have been no reports of incidences of similar illnesses in the UK.

Although it's possible to vape without nicotine, many vaping products contain nicotine to help users make the switch from smoking to vaping. Nicotine is the addictive chemical that occurs naturally in the tobacco plant. It is present in cigarettes and is the reason that many smokers find it so difficult to quit.

Nicotine is highly addictive, however it has not been shown to be cancer-causing or particularly harmful on it's own to people without heart conditions.

Although surveys report that young people are experimenting with vaping, this is amongst those who already smoke, or have experimented with smoking, in the majority of cases. Youth smoking rates have been on a continuous decline in the UK and there has been no rise in this since electronic cigarettes have become more widely used.

A 2019 study by the School of Social Sciences at Cardiff University looked into whether e-cigarettes had 'renormalised or displaced' youth smoking. The results of this study showed that there has been no significant change in the trend for ever-smoking amongst young people.

Is It Safe to Vape?

As we've discussed above, in the UK we have strict regulations on all vaping products. These regulations have been in place since 2016 and include a ban on the use of THC in any vape or e-cigarette products.

Every e-cigarette, refill, e-liquid and accessory must meet strict quality and safety standards. They must also be notified to the Medicines & Healthcare Regulation Authority (MHRA) before being offered for sale.

There have been no reports of vaping related illness or 'EVALI' with UK-regulated products.

Although we can't say that it is 100% safe, all the evidence so far points to vaping still being far safer than smoking. Vaping has shown to be the most effective way to reduce tobacco smoking with research showing that e-cigarettes are almost twice as effective at helping smokers quit than patches or gum.

Should You Stop Vaping?

Both Public Health England and the CDC in America maintain that e-cigarettes are much less harmful than tobacco.

In their latest press release, Public Health England advise that smokers should switch to e-cigarettes to help them stop smoking but non-smokers should not take up vaping.

"If you smoke there is no situation where it would be better for your health to continue smoking rather than switching completely to vaping.

"PHE's advice remains that e-cigarettes are a fraction of the risk of smoking, and using one makes it much more likely you'll quit successfully than relying on willpower alone." 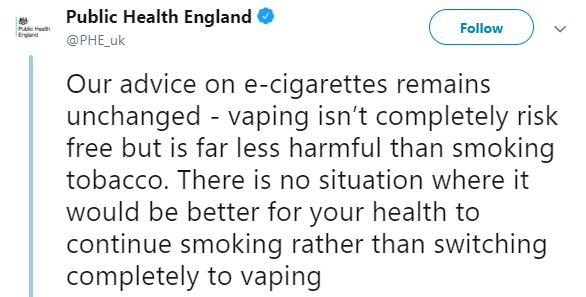 Deborah Arnott, the chief executive of Action on Smoking and Health (ASH), said "Vapers should not be scared back to smoking by the news of vaping illness in the US. Nor should smokers stick to smoking rather than switch to vaping. It is essential, however, to only use legal vapes bought from reputable suppliers in the UK and not source illicit unregulated products over the internet."

Below, Dr Zoe Williams discusses the safety of e-cigarettes in the below clip from ITV's 'This Morning'.

How to Make Sure You Are Buying Legitimate Vaping Products

We recommend following the below guidelines when buying e-cigarettes or vape products online.

Our Commitment to Product Quality & Safety

At OK Vape we have always been fully committed to ensuring that our products meet the requirements of UK regulations. All our products have been submitted and approved for sale by the Medicines & Healthcare Regulatory Agency (MHRA). We also ensure that they meet the strict regulations of the TPD (Tobacco Products Directive), and our product packaging includes a list of ingredients and all required safety warnings.

The other hardware brands that we sell online such as Aspire and Innokin, are regarded as some of the best manufacturers worldwide and therefore have the strictest quality and safety controls.